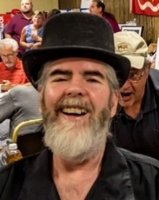 Patrick J. Gaffney III passed away on September 24, 2020 at 59 due to ALS.  He was born in Queens on September 4, 1961 to Patrick Gaffney, Jr. and Elizabeth (Carlson) Gaffney, and grew up in Queens and on Long Island, moving to Syracuse to attend ESF after graduating from Suffolk Community College.  Pat worked as a mechanic and was well known as the door man at Shifty’s.  He also hand-built beautiful scale model replicas of military planes and birds, frequently played Hockey, and was a gifted photographer.

Patrick was well-known for his kind and true friendship, his Irish Charm, and quick wit.  He loved a good joke, the beauty of nature, and a neat glass of Maker’s Mark.

Patrick was pre-deceased by his adored father, Patrick Gaffney, Jr.  He is survived by his dearest wife Jenn, two cherished children – Kathleen (KT) and Patrick (P4), his mother Betty, brothers – Hugh, and James (Kristy) and his sister Liz (Jeff), as well as a huge family – both blood and chosen.

Pat was supported and helped by so many during his battle, particularly during recent months by Erich Dixon, Mark Fitzgerald, Joe Kelly, and Don Deschamps; and Tammy Homan, RN, Dr. Suzanne Lamanna, and the staff at Upstate ALS Clinic.

Patrick was the kind of person everyone recognized, many knew, and hundreds loved.  He had a gift for becoming anyone’s friend that he chalked up to a long ago kiss of the Blarney Stone.  He was both large and larger than life.  He was fun-loving and hard-working, silly and smart, a giant and gentle, and tough and sensitive.  He was a good person. He will be missed most deeply.

A celebration of Pat will be held in the coming weeks.  His family encourages everyone who cared for Pat to support ALS research/patients in whatever manner they are able.