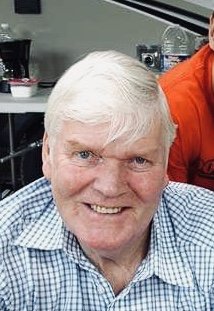 Lawrence (Larry) W. Raison, 74 of LaFayette, passed away Saturday May 18, 2019 at Crouse Hospital after a short illness. Born May 8, 1945 in Harlem, Ontario Canada, he was the son of the late Glen and Dorene (Townsend) Raison. He was a graduate of Tully Central School. Larry worked for Kings Royal Acres, Loblaws Food Store and P&C Foods. He was one of the original members of the Champions Counsel, Three-time National American Trucking Association TDC Champion, and a long-time helper and worker at the NYS Truck Driving Competitions. He enjoyed camping, coffee at Old Tymes Café, the Gem Diner, and spending time with family and friends. A kind and generous man, Larry was always willing to lend a hand. Time with his grandchildren was his greatest joy.

He is survived by his daughter Amy (Jayson) Chawgo of Tully; Sisters Jean (Dick) Barnes of Tully and Ruth (Larry) Boissoneau of Florida; Grandchildren, Justin and Megan Chawgo; Several In-Laws, nieces, and nephews.

He was predeceased by his wife of 48 years Linda L. (King) Raison, his son Scott L. Raison, and brother Doug Raison.

Donations may be made to the Tully Ambulance or a charity of your choice.

To send flowers to the family or plant a tree in memory of Lawrence Raison, please visit Tribute Store
Wednesday
22
May

Share Your Memory of
Lawrence
Upload Your Memory View All Memories
Be the first to upload a memory!
Share A Memory
Send Flowers