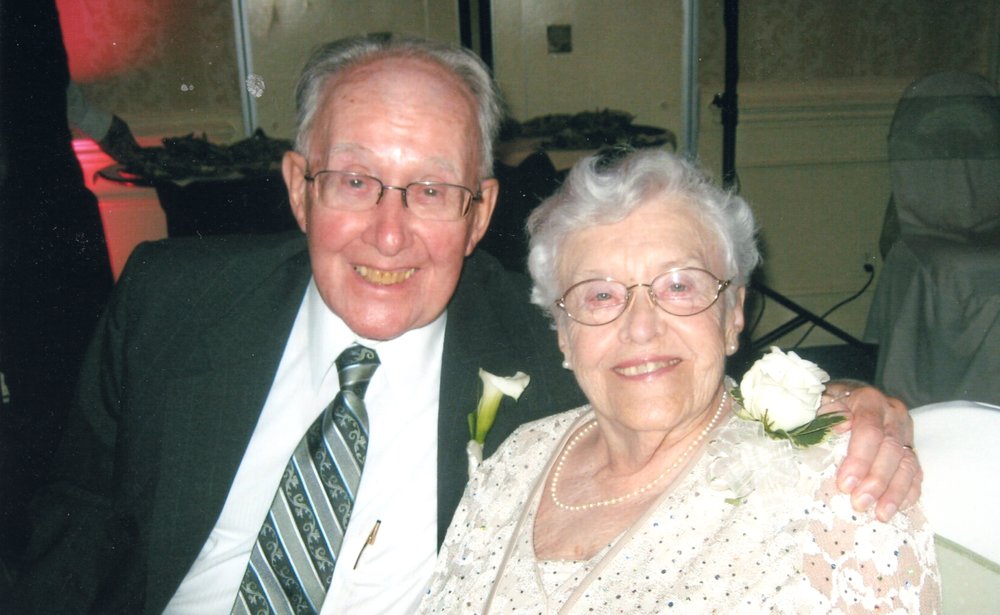 Robert D. Camenga passed away December 19, 2017 at the Nottingham. Robert was born in Hornell NY on May 11, 1923 to Carl and Gladys Camenga, and resided in Alfred NY for much of his early childhood. The family moved to Syracuse when he was a teen and he graduated from Eastwood High School in 1942. As so many young men at that time, his studies at Syracuse University were interrupted by WWII, serving three years in the US Army AAA division. Upon return from Europe, he resumed his education, graduating from SU with a BS degree in 1949.

Jane D. Camenga passed away on April 13, 2019, at the Nottingham. Jane was born March 24, 1925 in Saratoga Springs NY, to Leon and Marvel Dwyer. She graduated from Saratoga Springs High School in 1943 and received the Yaddo Medal for Scholarship and Character, a coveted honor given to one girl and boy in each graduating class. She remained close to her hometown all during her adult life, participating in high school reunions until 2017. She graduated with a BS degree from Syracuse University in 1947. While at SU, Jane was a member of Phi Mu fraternity and was active in the alumni organization for many years. She was always on the go and could be counted on whenever and wherever she was needed, whether by family, friends, or the community.

Bob and Jane met at SU but had to wait until he graduated before they married in Saratoga on September 3, 1949. In the meantime, Jane moved to Cherry Valley NY to teach business subjects in the high school and commuted to Syracuse on weekends to see her sweetheart!  Other than a brief residency in Hartford CT for insurance school, they were lifelong residents of Syracuse. Bob began his insurance career as an independent agent with Travelers, and later had a partnership with Martin Connor in the Connor/Camenga Agency. He was honored to serve several generations of loyal customers during his career.  In business and in life, he was known for his honesty, loyalty, generosity and concern for others. He was a longtime member of the Syracuse Kiwanis Club, serving as president for one term.

Jane was a stay at home mom for many years, resuming her teaching career briefly as a substitute teacher in Syracuse schools before deciding that teaching in the 1960’s was a far cry from the late 40’s.  She was a school secretary at Bishop Grimes High School for twelve years and loved every minute of it, especially interacting with the students. After retiring briefly, she returned to work as a medical secretary for Dr. William Wright for the next ten years, challenging herself with new technology.

Both Bob and Jane enjoyed sports well into their eighties: bowling in leagues, playing tennis and golfing at Drumlins/Nottingham Knolls Country Club where they were members for 30 years. Loyal SU fans, they loved watching the Orange on the gridiron and the basketball court and Bob was honored to run the clock for basketball for numerous seasons at Manley and the Dome.  Many busy and happy summers were spent with their family and friends at their cottage on Tully Lake. Bob and Jane were active members of First Baptist Church for over 70 years, serving on numerous committees and singing in the choir. They were active volunteers in the Syracuse Community for various organizations and were honored as Volunteers of the Year in 2004 by Meals on Wheels.

To send flowers to the family or plant a tree in memory of Robert & Jane Camenga, please visit Tribute Store
Wednesday
8
May

Share Your Memory of
Robert & Jane
Upload Your Memory View All Memories
Be the first to upload a memory!
Share A Memory
Send Flowers