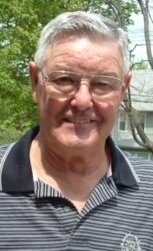 Bobby “Rebel” Edwin Ingram, 93, died January 18, 2022 after a brief illness. Bobby was born September 11, 1928 in West Union, WV, and was the son of the late Lloyd Stanley and Bessie Mae (Rollins) Ingram. He attended a one-room schoolhouse in West Union, and then in his late teens, he moved to Syracuse where his eldest sister and her family lived. He enlisted in the Navy in 1951 and spent 2 years on the U.S.S. Roberts. He graduated from a pollywog into a shellback in the tradition equator-crossing ceremony. He met and married Shirley Ann (Brauchle) in 1956, building the home he resided in for over 59 years on the south side of Syracuse.

He was an avid sports enthusiast often putting a couple of dollars on games and boards. In his 30-40s, he played fast pitch softball as a pitcher, bowling and later in life taking up golf and umpiring softball. He also enjoyed a lively game of Pitch with family and friends- with his last session playing for six hours! He was a member of American Legion Valley Post 1468 and Camillus Elks Lodge #2367.

“Rebel” was very mechanically inclined and spent much of his working career as an elevator repairman at Otis and Dover. He retired in 1991 from the Elevator Union, allowing him to devote more time to his passion of golfing and traveling with his wife; where they spent winters in Myrtle Beach.

Bobby is predeceased by his wife, Shirley Ann (Brauchle) Ingram of 51 years. He is survived by: son, Robert (Jan) Ingram of Germantown, MD; daughters, Donna (Dennis) Grogan of Scarsdale, NY, and Joanne Ingram of Charlotte, NC; five grandchildren, Mary and Amy Ingram, Patrick, Ryan and Meaghan Grogan; a sister, Betty Whitehair of West Union, WV; and numerous nieces and nephews. He is predeceased by seven sisters and brothers.

The family will receive friends on Friday January 28 from 3 to 7pm at Ballweg & Lunsford Funeral home, 4612 S. Salina Street. A Funeral Service will be held on Saturday, January 29 at 11am at the funeral home. A luncheon will follow, from 12 noon to 4pm, at Valley American Legion, 110 Academy Street. Burial will be at a later date at Onondaga County Veteran’s Memorial Cemetery.

To have a memorial tree planted in an area of need in honor of Bobby, or to send flowers for services, please use the Send Flowers link to the left. To light a memorial candle or leave an online condolence for the family, please visit Bobby's Tribute Wall.

To send flowers to the family or plant a tree in memory of Bobby Ingram, please visit Tribute Store
Friday
28
January

Share Your Memory of
Bobby
Upload Your Memory View All Memories
Be the first to upload a memory!
Share A Memory
Send Flowers
Plant a Tree