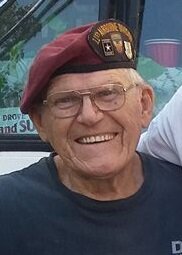 Edward J. Swiderski, Sr., 91, formerly of Syracuse, NY, passed away peacefully with his children by his side, at the Norman Veteran Center in Oklahoma. Ed was born in Syracuse in 1931 to the late Edward and Louise (Maslowski) Swiderski. He graduated from East Syracuse High School, and went on to serve in the U.S. Army from 1951-1954. He ended his military career as Corporal, having over 50 jumps under his belt as a Paratrooper. Ed then received his Bachelor's degree from Austin Peay State University in Tennesee- where he excelled at football and was drafted by the Green Bay Packers. Later Ed worked for many years at Chrysler Corp. in Syracuse, as a Foreman.

Ed enjoyed his time as a football coach for Pop Warner at Meachem Field; and was a major fundraising volunteer for the Corcoran High School baseball team. He was a devoted communicant of St. James Church, and loyal member of the Elks Club. As a proud veteran, Ed was a strong supporter of the American Legion Post #1468, and often helped with their various activities. He was an avid bowler for many years at the Valley Sports Center; and even donated over 15 gallons of blood to the Red Cross. In his later years, summers were spent with family- camping at various local places; favorites including Green Lakes State Park in Syracuse, and Yellow Lantern Kampground in Cortland. Ed was able to RV throughout all 50 states with his dearest Doris; highlighting their trip with 45 days in Alaska.

Along with his parents, Ed was predeceased by his wife, Doris, whom he has missed greatly since her passing in 2019. Edward is survived by: his six children, Margaret A. Frey of Syracuse, Katherine F. Swiderski of North Carolina, Theresa M. Swiderski Lawson of Nedrow, Edward J. Swiderski Jr. (Diane) of Pennellville, NY, James J. Swiderski of Syracuse, John W. Swiderski (Eileen) of Oklahoma, seven grandchildren, Edward "EJ", Kenneth, January, Harley, Samantha, Hunter, and Erin; four great-grandchildren: London, Karsyn, Gage, and AdaLynn; as well as several nieces and nephews.

An hour of visitation will be held on Saturday, January 28 at 11 am at the old St. James/Our Lady of Hope Catholic Church, S. Salina St., Syracuse. A funeral mass will follow at 12 Noon. Ed will be laid to rest with his beloved wife, Doris, at Onondaga County Veteran's Memorial Cemetery, with military honors, in a private family ceremony.

To have a memorial tree planted in an area of need in honor of Ed, or to send flowers for services, please use the Send Flowers link to the left. To light a memorial candle, or leave onlin condolences for family, please visit Ed's Tribute Wall.

To send flowers to the family or plant a tree in memory of Edward Swiderski, Sr., please visit Tribute Store
Saturday
28
January

Share Your Memory of
Edward
Upload Your Memory View All Memories
Be the first to upload a memory!
Share A Memory
Send Flowers
Plant a Tree