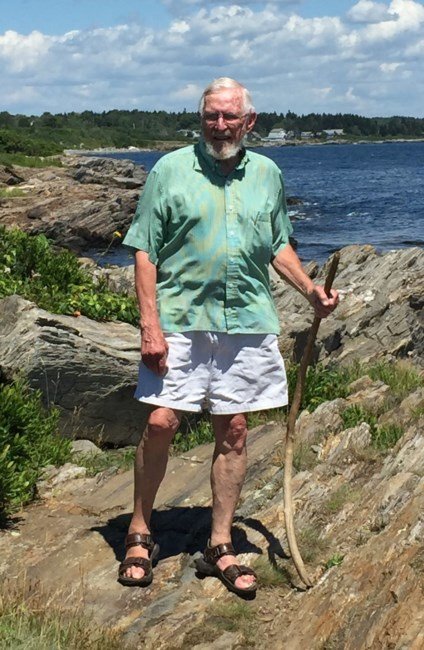 Reverend William L. Coop passed away peacefully on Friday morning, May 24, 2019 at home with family. Bill was dedicated in life and work to supporting peace, justice and the integrity of creation. He was a teacher and mentor to many, and was known for his unorthodox leadership style, patient wisdom and his welcoming of everybody. Bill was born in Elizabeth, NJ on June 2, 1938 to William L. Coop and Dorothy (Halvorsen) Coop, where he spent his first 16 years before the family moved to Toms River, NJ. His parents were members of the Presbyterian Church in Toms River where his father was the church historian, taping all the services. Bill was a member of the church youth group and was greatly influenced by Reverend Van Dyke. Bill graduated from Toms River High School, where he played football and baseball on the high school teams. He played the saxophone as a charter member of the Ocean County String Band, and spent plenty of time on the Jersey shore as a lifeguard through college. In 1956 he filed for the draft as a conscientious objector. He graduated from the College of Wooster in 1960 and went on to graduate study at Pittsburgh Theological Seminary (PTS). There, he met his first wife Linda Killey (Baldwin) and after two years at PTS he left to serve as a chaplain at the University of Maryland. He spent two years there working in the anti-war and civil rights movements while mentoring students at the university. Bill and Linda were on the steering committee for the March on Washington in August of 1963, working with several prominent civil rights leaders of the time. He said that Martin Luther King Jr. was the most influential figure in his life. Bill and Linda divorced soon after the march. In 1965 he returned to PTS for his final year toward a Masters in Divinity where he met Roxanna (Roxi) Ryman and her son Daniel Bertini. Bill and Roxi married in 1966 and the family moved to Severna Park, Maryland where Bill was ordained as the Associate Pastor at Woods Memorial Presbyterian Church. There he continued his work as a pastor to youth and an activist in the anti-war and civil rights movements. During the civil unrest that followed the assassination of Martin Luther King in 1968, he and another pastor from Woods Church, Bill Harvey, went to Baltimore to bring food and clothing to the community and to counsel against the rioting. The police tried to remove them, fearing for their lives, but they objected and stayed several days downtown in a friend’s shop in the midst of the melee. In January of 1972, Bill, Roxi, Dan, and their new son Joe moved to the New Hebrides in the South Pacific, where Bill and Roxi were hired as co-Directors of Christian Education for the Presbyterian Church of the New Hebrides. Combining their own activist instincts with teachings of liberation theology, they worked to empower the indigenous leaders of the church, people who were directly instrumental in the movement toward independence from English and French colonial rule and Japanese economic imperialism. Vanuatu eventually gained their independence as a nation state in 1980. In 1974, after France revoked their visas to stay in the New Hebrides, Bill and Roxi moved their family to Papua New Guinea, where they continued to teach liberation theology in the format of an ecumenical in-service program under the auspices of the Pacific Conference of Churches. Throughout their time in the South Pacific Bill and Roxi also actively campaigned for a nuclear free pacific. In 1977 Bill and Roxi moved to Valley Cottage, NY where he was hired as the Associate Executive for Christian Education in the Hudson River Presbytery. His teaching philosophy focused on mission work and socio-political awareness. During this time he fostered a love for the Stony Point Center, where he served as Board Chairman from 1978 to 1992. He also spent his own time in mission going to Cuba and Nicaragua as a “Witness for Peace.” After Bill and Roxi divorced, Bill married Joan (Herrlich) Ferris in 1992. In 1994 Bill and Joan moved to Syracuse, NY where Bill was hired to be the pastor at South Presbyterian Church. Here, he and Joan worked at inner city ministry, welcoming people of all sorts who had no place to go. They worked with police to solve the problems of racial profiling and excessive violence, dealt with housing issues through a non-profit they developed through the church, employment training for released convicts and created a tutorial program for at risk inner city children. In 2005 he retired and in 2007 Bill and Joan moved to Brunswick, ME where they spent summers for the previous ten years. They attended Mid Coast Presbyterian Church, where he spearheaded a campaign to pay off the church mortgage. They actively supported the farmers market, encouraging locally sourced food, and marched with activists from Peaceworks of Brunswick. All while enjoying retirement in their garden and exploring the coast of Maine with the Thursday Hikers group. Throughout his life Bill was active in numerous groups including Binational Servants, Clergy and Laity Concerned, Palestine-Israel Peace Network and the Presbyterian Peace Fellowship from which he won the Peaceseeker of the Year Award in 2016. He had recently moved to Estes Park, CO to live with his son Joe and spend time in the mountains with his family. He is preceded in death by his wives Roxi and Joan, and his parents William and Dorothy Coop. He is survived by his son, Joseph W. Coop (Janelle) of Estes Park, CO, and his step children, Daniel R. Bertini (Alice) of Boulder, CO, Alison Ferris (Peter Shellenberger) of Des Moines, IA, and Laura Ferris (Garrett Hamlin) of Troy, NY. He has two grandchildren, Jana and Chloe Coop, and six step grandchildren, Walter and Caroline, Sophie and Eliza, and Peter and David. In lieu of flowers, memorial contributions can be made to Presbyterian Peace Fellowship, 17 Cricketown Rd, Stony Point, NY, 10980. A memorial is planned on Sunday October 6th 10AM at South Valley Presbyterian Church, 116 W. Glenn Ave., Syracuse.

To send flowers to the family or plant a tree in memory of Rev. William Coop, please visit Tribute Store
Sunday
6
October

Share Your Memory of
Rev. William
Upload Your Memory View All Memories
Be the first to upload a memory!
Share A Memory
Send Flowers