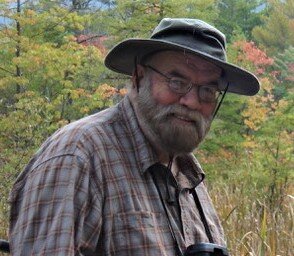 Rainer Hans Alfred Brocke, 87, passed away peacefully at home on Sunday, September 12, 2021 after a long illness. He was born on November 24,1933 in Calcutta, India of German parents.  When Hitler invaded Europe in 1939, he and his family were interned by the British for eight years during which he was home-schooled by other interned Jesuits and enjoyed roaming the wild country around the camp.  When released in 1947 he attended the Woodstock School, an American run boarding school in the foothills of the Western Himalayas, where he further developed his love of nature, the outdoors and an interest in moving to the United States.

Rainer immigrated to the United States in 1951 and enrolled at Michigan State University, where he earned both his bachelor's and master’s degrees in wildlife management and ecology, working as a lumberjack in Oregon during summer months. He married Mary Alice Biebesheimer in 1956, and they had three children.

At Kensington Nature Center he worked as a naturalist, and then continued formal studies at Michigan State and earned his PhD in 1970.  Upon completion of his doctorate on the bioenergetics of the opossum,  he accepted a position from SUNY College of Environmental Science and Forestry to conduct wildlife research at Huntington Wildlife Forest in Newcomb, NY and moved his family to Long Lake, NY, in the Adirondack Mountains.

Throughout the decade of the 1970's, Dr. Brocke led an active life in the community of Long Lake, serving as president of the school board, president of the Long Lake Lion's Club, and acting in community theatre. He also constructed a large addition to his lakeside home mostly by himself. While living on the lake in this small mountain town, he enjoyed snowmobiling, canoeing, boating and fishing. He was an avid hunter, who kept his freezer stocked with venison much of the time.

In 1981, he became an associate professor and later a full professor at ESF’s Syracuse campus, teaching general ecology, wilderness wildlife management, endangered species conservation, and various graduate courses. He was appointed director of the Cranberry Lake Biological Station in 1982, a position he held for six years.

In addition to research and teaching, Brocke’s professional duties encompassed student mentoring, grant writing, research publication.  He was also a founding member of the the Adirondack Wildlife Program which led to a research effort to restore the lynx to the Adirondack Park.  Extramurally, he was president of the New York Chapter of the Wildlife Society (TWS), chair of the Wildlife Educators Committee (northeastern universities) of TWS Northeast Section, and co-author of the TWS Policy on Wildlife Management in Wilderness. Other professional memberships included the American Society of Mammalogists, Society of Conservation Biologists, Ecological Society of America, and American Ornithologists Union.

After his years in the Adirondacks, Rainer moved to central New York, married Judith Ash Zubal (with a son and two daughters) in 1983, and they purchased a farm of 47 acres and a century-plus old home in Lafayette, which he renovated. He continued to indulge in his lifelong passions of hunting and fishing at nearly every opportunity, and had a deep knowledge and understanding of the natural world, acquired through observation, experience, and his extensive reading of books, periodicals and scientific journals.

Rainer retired from SUNY ESF in 1999 at the rank of Professor Emeritus.  Retaining most of his professional affiliations after retirement, Rainer co-authored a book with SUNY ESF colleagues titled, Adirondack Park – The Great Experiment in Conservation.

In his later years, he enjoyed watching wildlife from the kitchen table with his beloved wife, good friends and family. He took pleasure in wide-ranging discussions and storytelling there, and called himself a teacher to the very end.

A celebration of life is planned for Saturday, October 2nd at 11 AM at Stafford Park, Lafayette, NY. In lieu of flowers, please consider a donation to the LaFayette Optimists Club, PO Box 204, LaFayette, NY 13084.

To have a memorial tree planted in an area of need in honor of Dr. Brocke, or to send flowers for services, please use the Send Flowers link to the left. To light a memorial candle or to leave an online condolence for Dr. Brocke's family, please visit his Tribute Wall.

To send flowers to the family or plant a tree in memory of Rainer Brocke, PhD, please visit Tribute Store
Saturday
2
October

Share Your Memory of
Rainer
Upload Your Memory View All Memories
Be the first to upload a memory!
Share A Memory
Send Flowers
Plant a Tree